Aeroponic tomatoes on a Tower Garden

Growing tomatoes in a Tower Garden is not just a “plant & play” experience. There are many pros and cons, as well as different growing techniques to consider.

When starting the seedling process for tomatoes, the manufacturer advises to plant 2 seeds per rockwool/coco coir pod, and when seedlings are about 5 cm tall, they recommend to cut the weaker plant. At Agrotonomy Tower Farms, we prefer to start with only 1 seed per rockwool: our experience has proven to us many times that when 2 seeds germinate at the same time in the same constrained space, the smaller seedling does indicate necessarily that it would develop in a weaker plant when fully grown. Starting with one seed per rockwool is our preference as it allows us better to benchmark which are the healthiest seedlings that need to be planted.

Seeds germinate generally in 10 to 14 days and seedlings take 5 to 6 weeks to be ready to be planted.

If using your Tower Garden in a greenhouse, pollination assistance is recommended.

Over the years, at Agrotonomy Tower Farms, we have grown over 50 different varieties of tomatoes using Tower Garden technology.

Furthermore, we have used different techniques in terms of pruning and structural growing support.

There are many YouTube videos and other sources of advice when growing tomatoes on a Tower Garden, and once again, like all advice published by Agrotonomy Corp., we only advise our readers based on our own experience. 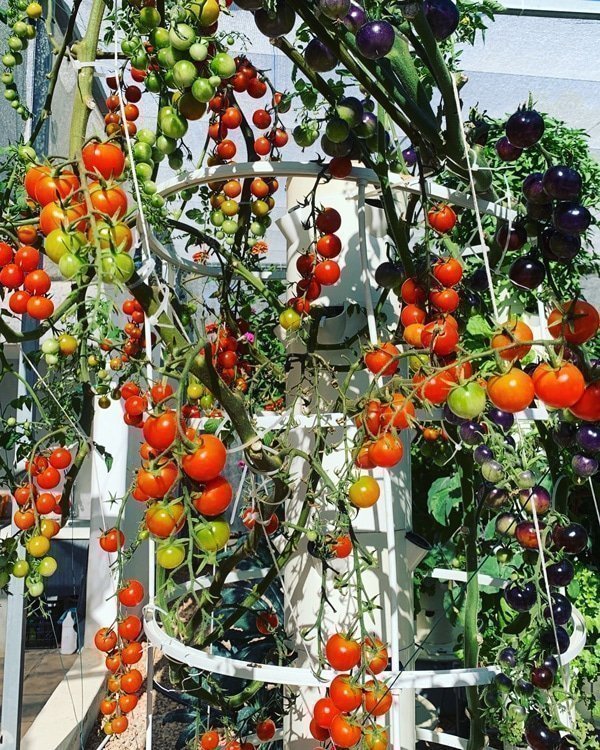 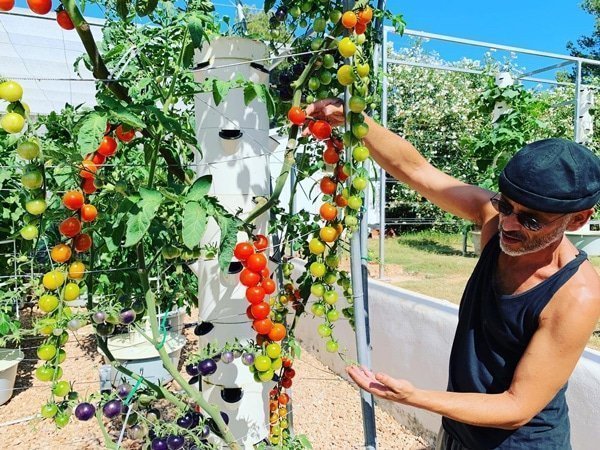 Some indeterminate tomato varieties will grow from April through December (in a Mediterranean climate for example). Fruits will be harvestable from June through November. The tomatoes picked until mid-July taste better than the tomatoes in August, however, the tomatoes harvested from the same plant around late September throughout October are much sweeter.

Tomatoes grown in the soil can deliver flavors way beyond the taste of tomatoes grown outdoors on a Tower Garden. This is the proof to us that it is not the heat which affects the taste of the tomatoes, but rather, when temperatures go above 32°C/90°F, the water in the reservoir of the tower warms up to unacceptable levels, hence inhibiting the full release of flavonoids. This would explain their inferior flavor despite their increase crop yield in comparison to their counterparts grown in the soil.

We advise against using Tower Garden technology to grow tomatoes using the bottom planting ports and letting the plants crawl on the ground. Of course, this is probably what most of you were advised to do, however, at Agrotonomy Tower Farms, we are 100% against allowing plants to crawl from the tower onto the ground. One of the biggest perks of Tower Garden technology versus conventional farming/gardening is the amazing reduction of pesticide usage. One of the main reasons is that plants are growing off-the-ground thus preventing a zillion potential pathogens of all kinds from crawling up on the tower.

When using an aeroponic tower, we advise the use of a grow cage, or even better, using a trellis or a customized growing structure. We do realize that in the USA, only the Tower Garden flex comes with a cage (the new Tower Garden for home-use does not come with a support cage option). A grow structure can be as simple as 4 or 5 stakes planted around the tower connected with twine/cables/scrog nets etc. to support the growth of the plant.

As you can see from visiting our YouTube account, in the past, we have grown tomatoes using different pruning strategies. However, from all our trials and errors, we have learned that for best results using Tower Garden technology, we prefer to grow indeterminate cherry tomato varieties using a strict pruning approach aiming at allowing only 2 to 3 main branches to grow. Aside from giving bigger fruits, such a technique allows us to harvest much tastier tomatoes.

When growing tomatoes by getting rid of the suckers to limit the number of main stems, tomato plants will keep on growing on an ongoing basis. This is why such branches need to be trained to crawl accordingly.

The crop yield of such pruning techniques might be lower than when allowing tomatoes to grow in a bush-like effect. However, when limiting the number of main branches, aside from a much more flexible leverage to train the vines to grow in specific areas, more tomato plants can be planted on the same tower (or other crops can be planted at the same time). Uncared tomato plants left to grow into a bush are invasive and hinder the planting potential of the tower.

The root system of a tomato plant is not strong enough to support all the fruits growing on an uncared tomato plant. This way we have become big advocates of growing tomatoes on a Tower Garden by limiting the number of main branches/stems (as featured on these two videos).

Although you should grow a maximum of 2 tomato plants per planting section, ideally, for optimum results and in order to allow enough root space (above all if growing indeterminate tomato varieties), we recommend only one plant per planting section.

Of course, when running a comparative test, we also give optimum soil quality and organic fertilizers to the tomatoes growing in the soil and a lot of TLC!

Although tomatoes require full sun exposure, when using Tower Garden technology outdoors above 32°C/90°F, it affects the overall flavor of the tomatoes. 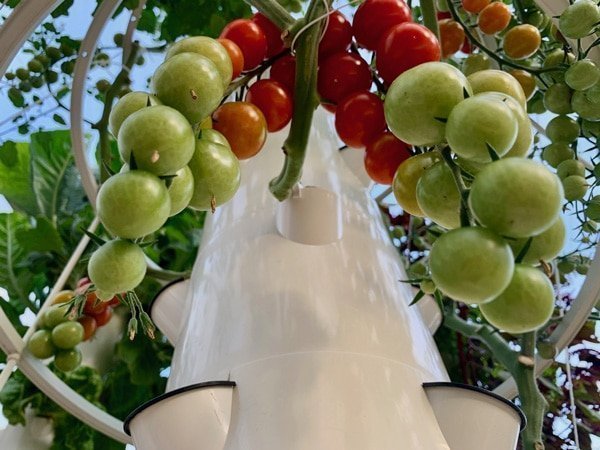 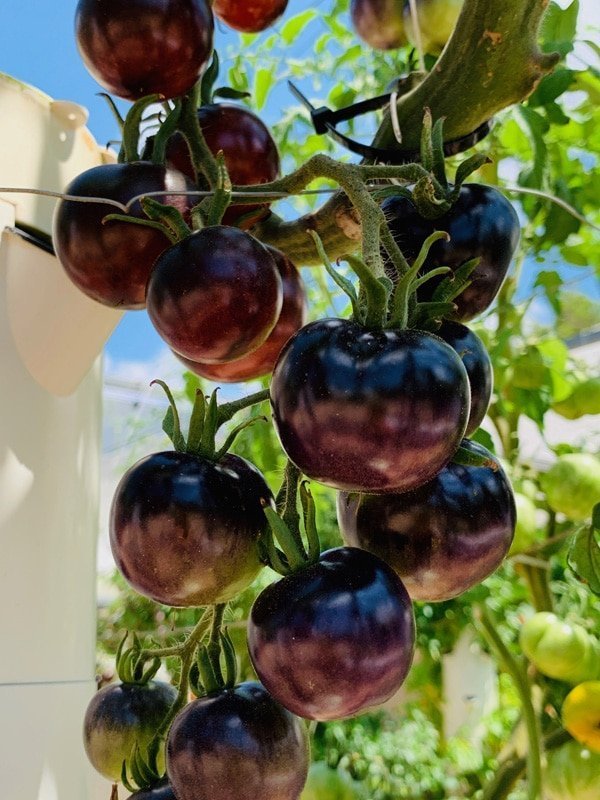 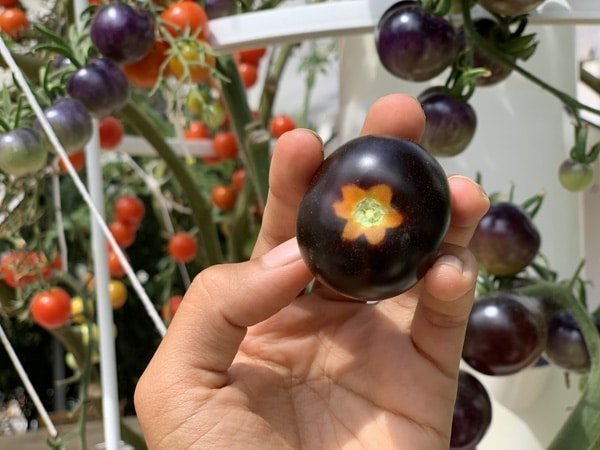 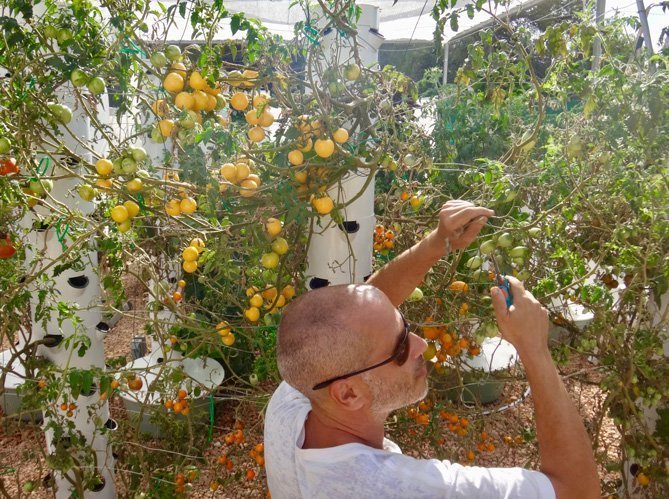 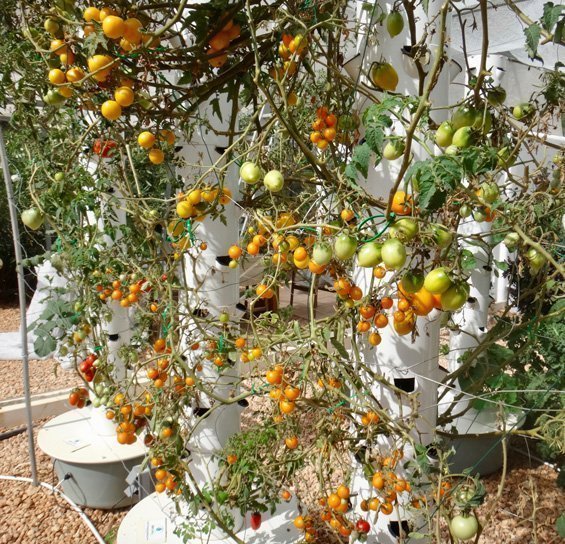