Cannabis is by far one of the most intricate capricious crops to grow. Since we started to farm aeroponically, we have conducted numerous comparative tests between growing cannabis in the soil vs. using our towers.

Both options feature pros and cons, however, growing cannabis on aeroponic towers features ‘unfair’ advantages which are truly unique in this ‘controversial field of gardening’.

Growing cannabis the traditional way successfully involves an initial meticulous preparation of the soil; seedlings must then be given a special rooting nutrient solution for 1 – 2 weeks followed by the growth-enhancement-fertilizer-phase; nutrients are then switched over the last few weeks to a special flowering formula complemented by a budding sugar-based fertilizer administrated prior to harvest.

In comparison, growing marijuana in the towers is not only cheaper but also, much easier! Much less work is involved since a unique soluble nutrient solution does it all from seedling to harvest! The same nutrient mix which we use to grow tomatoes, cabbages or strawberries is used indifferently to grow cannabis: this is a miracle in itself! Not only do we use the same nutrient mix for all crops, but it is also the same mix of natural minerals which are being used when growing cannabis from start to finish!

Speaking about overall expenditure costs, when growing plants in the soil, aside from the ongoing unaccounted labor involved, we spent over €50 – €100 ($60 – $120) per plant in nutrients and planting soil.

In comparison, when growing the same plants on our towers, we spent less than €5-to €10 per plant in nutrients and electricity…. in other terms, depending on the strain, based on our extensive comparative tests, it costs about 10 times less to use the towers in comparison to organic conventional soil gardening.

Aside from the cost-saving consideration, as mentioned previously, much less labor is involved with the towers. It is only a matter of planting the seedling in the tower and watch it grow. Of course, even when using aeroponic towers for marijuana cultivation, it is still necessary to monitor the growth of the plants closely. Growing cannabis off the ground on an aeroponic tower greatly reduces the risks of pests and fungi but does not completely eradicate such problems.

Although we have never had to deal with any kind of pests when growing cannabis aeroponically, to our amazement, we did find a few slugs and snails grazing on our plants. We circumvented such problem by spraying the bottom reservoir with an organic antislug formula.

We also experienced slight problems with mildew which was easily put under control with the help of a natural fungicide. However, as mentioned previously, it is very important to monitor the plants closely in order to detect such potential problems in their early stage of development. We do advise you to be cautious when spraying anti-fungal products on your plants since fungicides can stain your tower. This is why we advise you to focus diligently on the plants and avoid spraying the tower as much as possible. The same applies to natural insecticides mainly when formulated with neem oil. – When germinating cannabis seeds, we experienced a much lower success rate using rockwool versus using soil (based on numerous comparative tests). With planting cannabis seeds in rockwool, not only did we notice a lower germination percentage, but this process took longer. In fact, most of the seeds planted in the soil gave seedlings ready to be transplanted within 7 to 10 days while it took at least an extra week to get the same results with rockwool… – When growing regular plants aeroponically, choose feminized seeds (we advise against sexing your plants on the towers). Also, when growing “full cycle cannabis”, it is crucial to strategize the strains properly and to choose plants which are known to give smaller plants (not smaller yield, just medium-size plants)! Sativa should go on the lower part of the tower since the plants grow taller than Indica strains.

When planting cannabis in the lowest section of the tower, expect a DWC (Deep Water Culture) situation. Roots will grow in the bottom reservoir and cannot be cut (like for the root management of other plants such as chard, cabbages etc.). Trimming the roots of your cannabis plants (in an effort to protect your pump) will kill them. Although your tower is not meant to be used as a DWC system, surprisingly enough, plants growing with their roots fully submerged in the diluted nutrient solution always gave equal results (crop yield and potency) as the plants growing on the upper section of the tower.

When plants appear to grow too big for the tower to remain straight, we recommend giving external support to the stem & main branches. However, even when a plant appears to grow “too much horizontally” (challenging the balance of the tower), do not bend it to point upward. In fact, when bending the stem of a large cannabis plant in an effort to straighten it so that it can grow more ‘alongside’ of the tower, it stresses the roots to the extent of killing the plant. Always let cannabis follow the growth angle it chooses and support it when necessary without bending the stems. When growing full cycle feminized plants, we recommend growing a maximum of two plants per tower. In fact, cannabis roots are massive and overly planting on one tower can clog planting sections thus not allowing an even delivery of the nutrients.

Although the seedling process seems to be slower when using rockwool versus soil, plants grow faster when using an aeroponic tower. In fact, plants which normally take 5 to 6 months to be ready for harvest when growing in the soil can be ready as fast as 30 to 45 days earlier when grown aeroponically.

Furthermore, in comparison, plants grown in the soil are fuller than those grown on towers and give a bigger crop yield. However, the fact that several plants can grow at the same time on one tower while delivering faster results with less labor, fewer pests, less fungi, and at a much lower cost makes aeroponic towers our favorite option to grow cannabis. 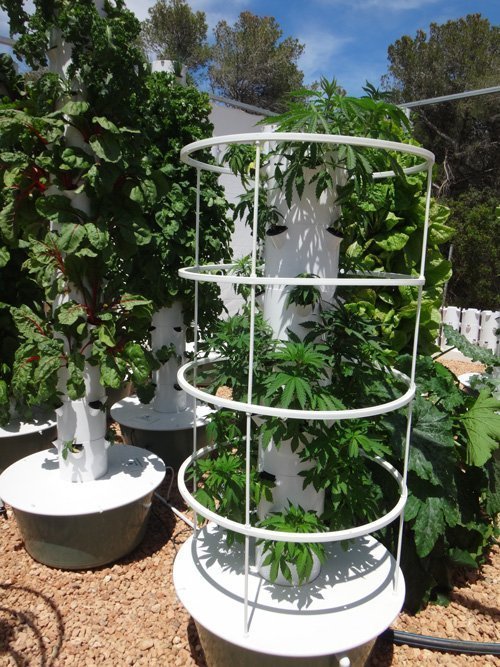 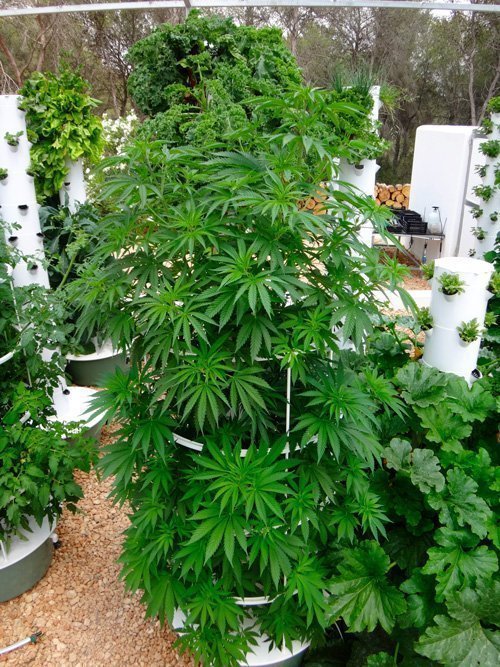 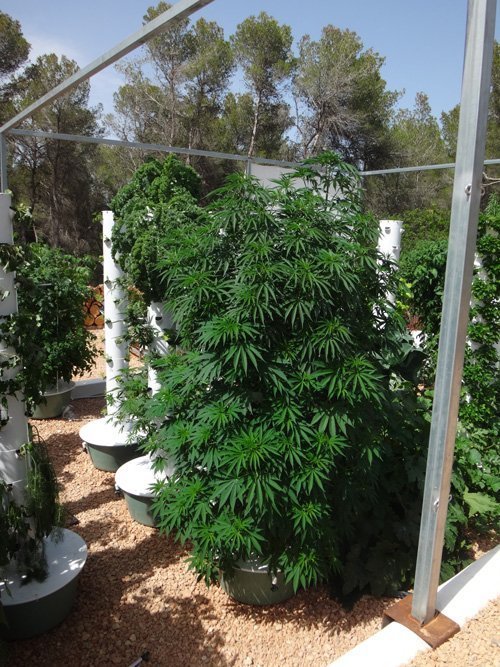 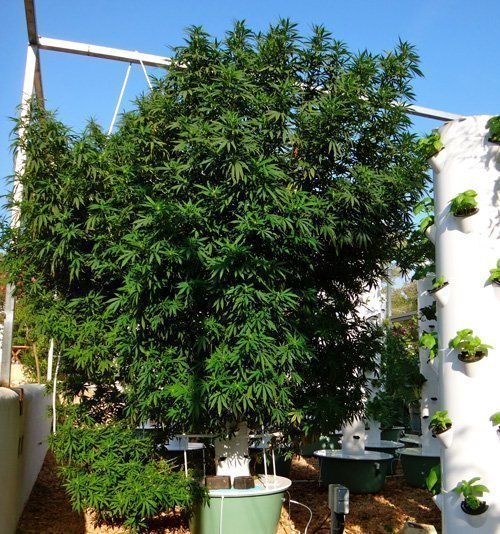 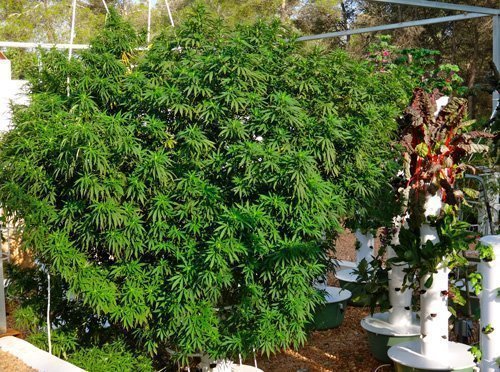 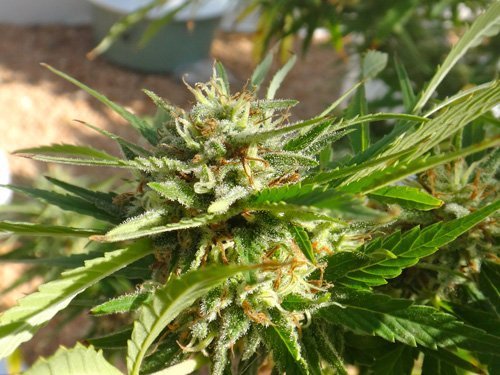 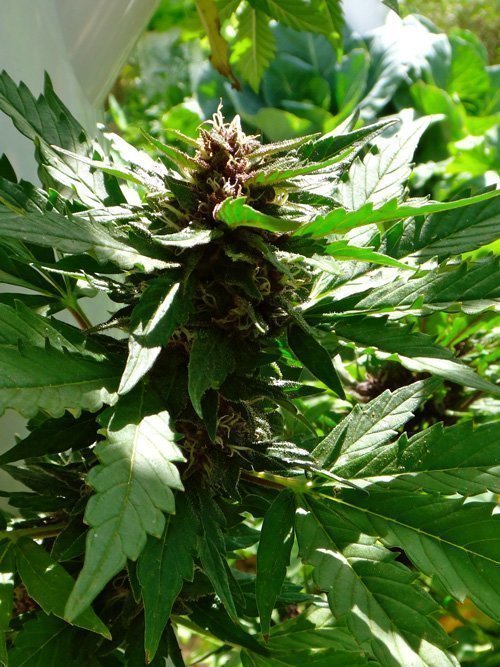