The advantage to cultivate chili peppers on a Tower Garden is that they grow generously, giving abundant crop yields, and potent quality fruits. And yes, chili peppers are fruits and not vegetables from a botanical perspective!

Growing chili peppers from seeds is a long and tedious process. Firstly, it takes almost 6 weeks for the seedlings to be ready to be transplanted into the Tower Garden. It then takes approximately three months for the first fruit to be harvestable. Depending on the variety of peppers, plants can give fruits during a period of 3 to 4 months… They need to be harvested on a daily/weekly basis in order to increase crop yield.

The disadvantage of growing chili peppers on a Tower Garden is that the plants grow big and are invasive. In most cases, a grow cage is recommended to support the weight of the plants. Also, when growing peppers, towers are dedicated to growing plants for a period of approximately 6 months (meaning that the towers cannot be washed during such a timeframe). Also, when using aeroponic or hydroponic technology to grow chili peppers, plants need to be discarded after they stop giving fruit, which is a shame considering that chili peppers are perennial plants that can live many years (if protected from the frost).

Nevertheless, when weighing the pros and cons of growing chili peppers using our hydroponic towers, although we do not recommend doing so on a commercial level, we always dedicate a few towers just for hot peppers considering their superior quality.

This year, amongst other varieties of chili peppers, we grew Carolina reapers which are known to be some of the hottest peppers on the planet, reaching 1,569,000 on the Scoville scale! This pepper is red and gnarled, with a bumpy texture, and features a small, pointed tail. It is a crossbreed between the “La Soufriere” pepper from Saint Vincent and a “Naga Viper” pepper from Pakistan, which was “engineered” by an American breeder named Ed Currie. It was certified as the world’s hottest chili pepper by Guinness World Records on August 11, 2017, surpassing the previous record set by the Trinidad Scorpion, aka “Butch T”.

However, after shortly being ‘crowned’ the hottest pepper in the world, the Carolina reaper was ‘dethroned’ by a Welsh breeder named Mike Smith with his ‘Dragon’s breath’ pepper, which scored 2.4 million on the Scoville scale.

Next year, in 2023, we will grow the Butch T pepper and the Dragon’s breath pepper for experimental purposes. In fact, at almost 1.6 million on the Scoville scale, from our perspective, we found that the Carolina reaper was already too hot to be included into our cooking. When that hot, peppers oftentimes overshadow the flavors of the meal/recipe.

Nevertheless, we are committed to growing all types of chili peppers in our aeroponic Tower Farm: Dragon’s breath” and “Pepper X” will be on the menu next year. 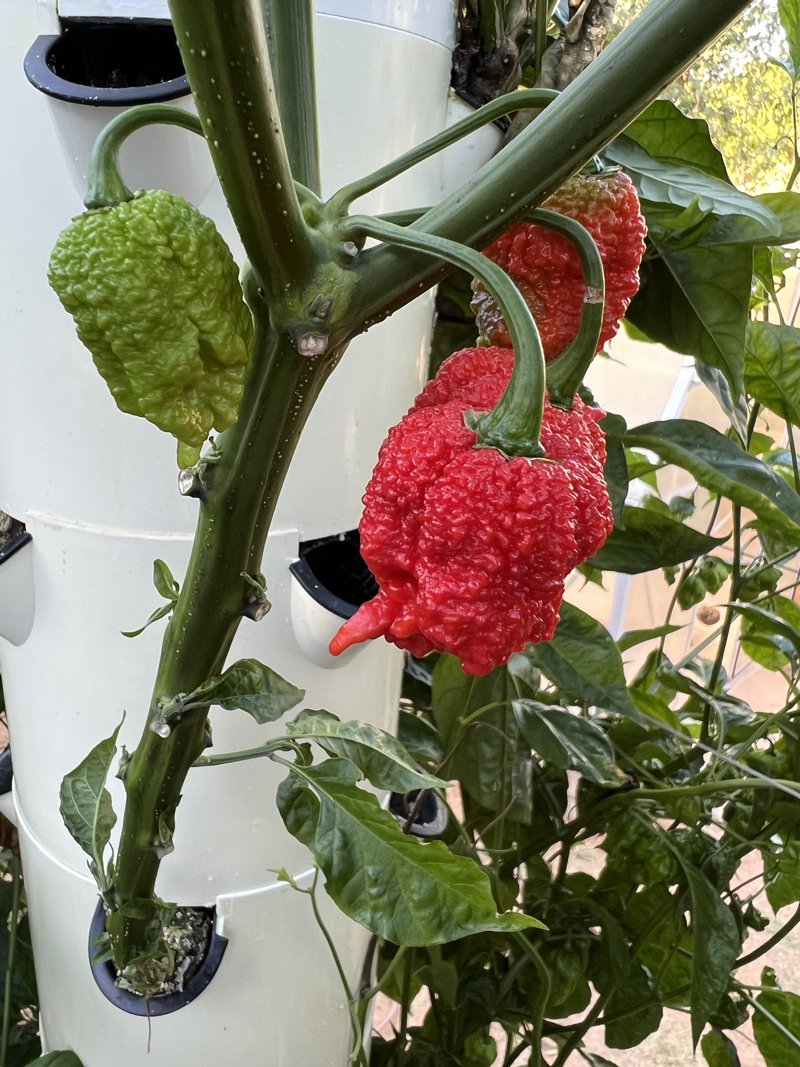