Firstly, let’s get any form of argument out of the way: we love organic farming, we respect reverently the world of permaculture, and we encourage and support anyone involved in such constructive and meaningful food growing endeavors. When we started Agrotonomy Corp., some of us had been involved with organic farming for over two decades….

Allow us to outline factually why the carbon footprint of organic farming is much higher than aeroponic vertical farming, and why in many situations, we are the only technology available while organic farming is not even an option:

#1) Soil toxicity: We are currently setting up Tower Farms where the soil is so toxic that it is not farmable (i.e. slums in Africa and South America). We are involved with a Tower Farm project at 4200 m elevation in Peru (CEA greenhouse involved). This project is meant to feed Inca communities living at high elevations up in the Andes mountains where nothing grows. Their land has been poisoned/trashed by the mining industry. We are in the process of producing tons of fresh foods year-round where no other agricultural technology has delivered results before.

#2) Water saving: we are currently involved with Tower Farm projects from the Chihuahuan Mexican desert to Masai Mara in Kenya, where water availability is scarce. Our aeroponic tower technology only uses 5% of the water in comparison to conventional soil farming. In other terms, we save 95% water with our aeroponic towers. This is not argumentative but rather very much factual. Organic farming in these extreme contexts is utopia.

#3) Space-saving: depending on crops, we save from 75% to 95% space. For example, we are working on building a small Tower Farm for an orphanage in Mexico. They can only allocate us 100 m² of land which is part of their backyard. In 100 m², with an aeroponic Tower Farm, we can grow the same amount of vegetables which would require 1000 m² to 1200 m² of land if grown in the soil.

The same applies when we develop a project inside a greenhouse. Farming vertically allows us to grow 10 times more crops within the same structure in comparison to soil farming or conventional hydroponics. This means up to 90% reduction of our energy footprint.

#4) Pesticides: One of the main reason why we stopped organic farming was because of the amount of pesticides which is required. When all the fields around have been sprayed with heavy chemicals for years and years, pests and insects of all kinds have “mutated”, and have become more resistant, more resilient… the organic farmer is therefore compelled to spray outrageous amounts of organic pesticides… Whether using pesticides based on pyrethrin or neem oils (just for example), the organic farmer needs to spray heavily concentrated amounts to keep the crops bug-free. Most organic food aficionados have no clue of how much and how many pesticides are being sprayed before the crops reach maturity. An organic vegetable garden in someone’s backyard cannot be used to benchmark the carbon footprint of an organic commercial farm.

When operating a Tower Farm, we rarely have to spray anything – ever! This is a fact that cannot be argued since it is extensively documented based on countless tons of crops which we have been growing both ways. 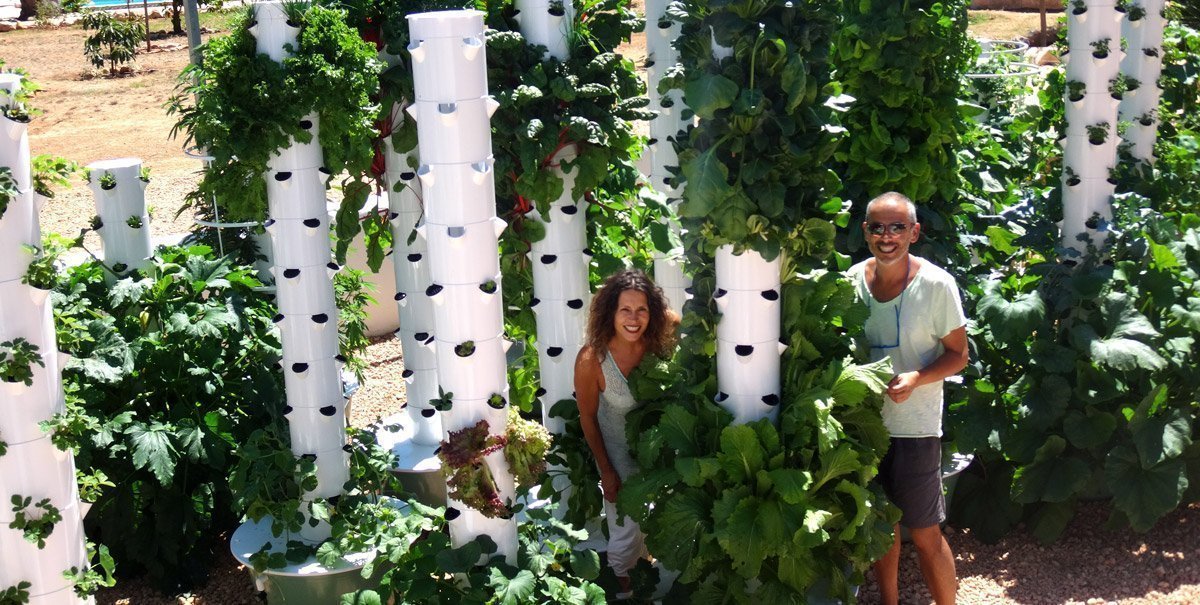 #5) Increased nutrient density: Tower Garden is the only agricultural technology that has invested in an extensive scientific comparative study. This study compares scientifically crops grown on our aeroponic towers versus the best data ever collected of crops grown through conventional methods in the soil. In all cases, we average out 40% nutrient density increase and 30% to 60% increase for antioxidant and flavonoid contents.

We do not advocate to grow better greens, but rather, we prove it. Science does not lie.

The manufacturer spent over $1 million conducting these scientific comparative studies. No one else in our industry has ever taken the time nor invested the financial resource to show the quality of their crops.

Not only this comparative scientific study proves the superior nutrient density content of our fruits and vegetables, but it also shows that we average 35% crop yield increase in comparison to soil farming.

#6) Reduction in carbon footprint: Some Tower Farms feature thousands of towers producing tons of fresh produce within city limits. When considering that vegetables travel over 1000 miles on average before landing on a plate, from rooftops to abandoned warehouses, and from greenhouses to atriums, our technology is versatile and has been adapted to every urban context reducing considerably the carbon footprint of our crops.

We are currently involved with designing a Tower Farm featuring several hundred towers for the rooftop of a hospital: this is the type of agricultural endeavor which saves several million miles each in terms of food transportation.

Once again, it is important to stress that we support and honor organic farming and that we have the deepest respect for permaculture endeavors. However, there are many individuals involved in permaculture and organic farming who are ignorantly giving bad press to our Tower Farm for being a “petroleum abomination”.

Although technically our proprietary PC/ABS is considered to be plastic, Tower Garden is the only soilless-food growing-system which has been approved for LEED projects (LEED: Leadership in Energy and Environmental Design). Tower Garden has been approved for LEED projects due to the durability of the material used to build the towers, in conjunction with the low energy and high crop yield of our technology.
When it comes to agriculture, whether organic or nonorganic, whether soil-based or soilless, nutrients are stored in plastic containers; Hoses used for irrigation systems are petroleum-derived; Tractors are fuel-powered; Crops are stored in plastic containers after harvests, etc. Furthermore, organic agriculture uses tons of plastic mulch made from wasteful plastic material (which quality is far inferior to the material used to make our towers).
Our PC/ABS proprietary formula is the safest plastic ever engineered for agricultural-related equipment.
Some Tower Farms have been using the same towers for the last 10 years. The longevity of a Tower Garden is unparalleled in the hydroponics- aeroponics industry. No one in our industry uses a PC/ABS material as safe, as thick, and as durable whether used indoors or outdoors.

In other terms, when considering the “petroleum carbon footprint” of a Tower Garden in comparison to the fuel required for the tractors which work the land for organic farming, and when putting into consideration all the pollution factor of the vehicles involved in the transportation of such organic produce, our aeroponic tower technology ends up being more ecological from a carbon footprint perspective. Once again, this is not argumentative, but rather, it is factual: this is the very reason why we are the only agricultural technology to be approved for LEED certification. The total carbon footprint of our aeroponic Tower Farms had to be calculated precisely to be able to be approved in LEED projects.

Many of our Tower Farms are 100% solar powered such as True Garden, our greenhouse in Arizona, where we produce within city limits tons of greens year-round, regardless of the Sonoran desert heat, which can reach up to 50°C with 95% humidity in August… we are talking about extreme climate conditions that make organic farming and permaculture impossible (at least to farm year-round)… In our case, regardless of climate, we grow the most nutritious plants 12 months out of the year completely off-the-grid… Our clientele is located within 20 miles of our Tower Farm… There again, we are talking about the uniqueness of the possibilities offered by our versatile aeroponic technology. By the way, we have been using the same towers for the last eight years and it does appear that they will be able to serve us for another decade, if not longer!

In comparison to organic farming, with our Tower Farms, we save 95% water, 90% space, 98% pesticides, 90% transport… and our vegetables feature on average over 40% increase in nutrients density and 35% crop yield increase as well… and it is not just what we say: this is proven and documented scientifically!

In conclusion, we wish to emphasize that regardless of our Tower Farms involvements, we are big supporters of organic farming. Also, we are big fans of permaculture and contrastingly, with the same enthusiasm, we support any ecologically oriented agricultural 4.0 food growing technology and strategy.

When it comes to feeding the masses using eco-friendly solutions, we might ‘talk the talk’, but we also ‘walk the walk’: may we suggest to those hard-core criticizing organic soil-based farming lovers to get informed before expressing their uneducated and unjustified opinions usually aimed at trashing our technology. We are on the same boat aiming at a better world! We are not the solution, but we definitely consider ourselves as part of the solution! 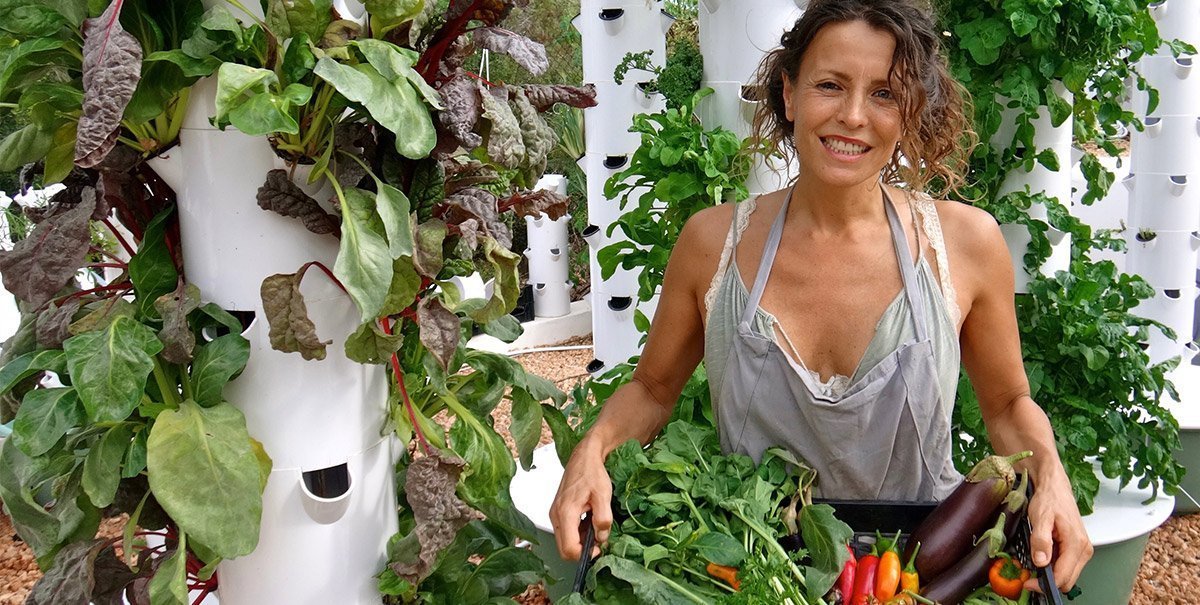 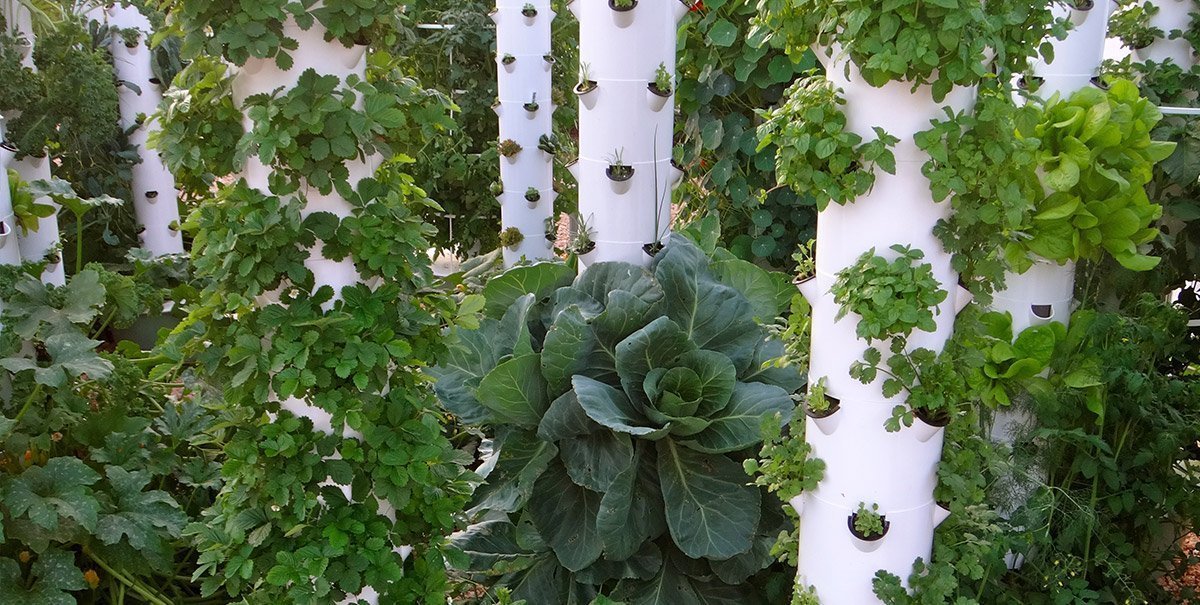