Should I set up a Tower Farm outdoors, indoors, or in a Greenhouse?

When considering to set up a fully automated commercial aeroponic Tower Farm, people often wonder as per which is the best option.

Since we have set up numerous Tower Farms around the world whether indoors, outdoors, or in greenhouses, allow us to share the pros and cons of each option as follows:

When setting up a Tower Farm outdoors, it is obvious that the first consideration is the weather.

Although a Tower Farm can produce winter crops as temperatures lower, a Tower Farm will not do great under 5°C/40°F nor above 32°C/90°F.

This is why some Tower Farm owners (in continental weather conditions like in New York or Paris) only operate outdoors seasonally from spring to fall. 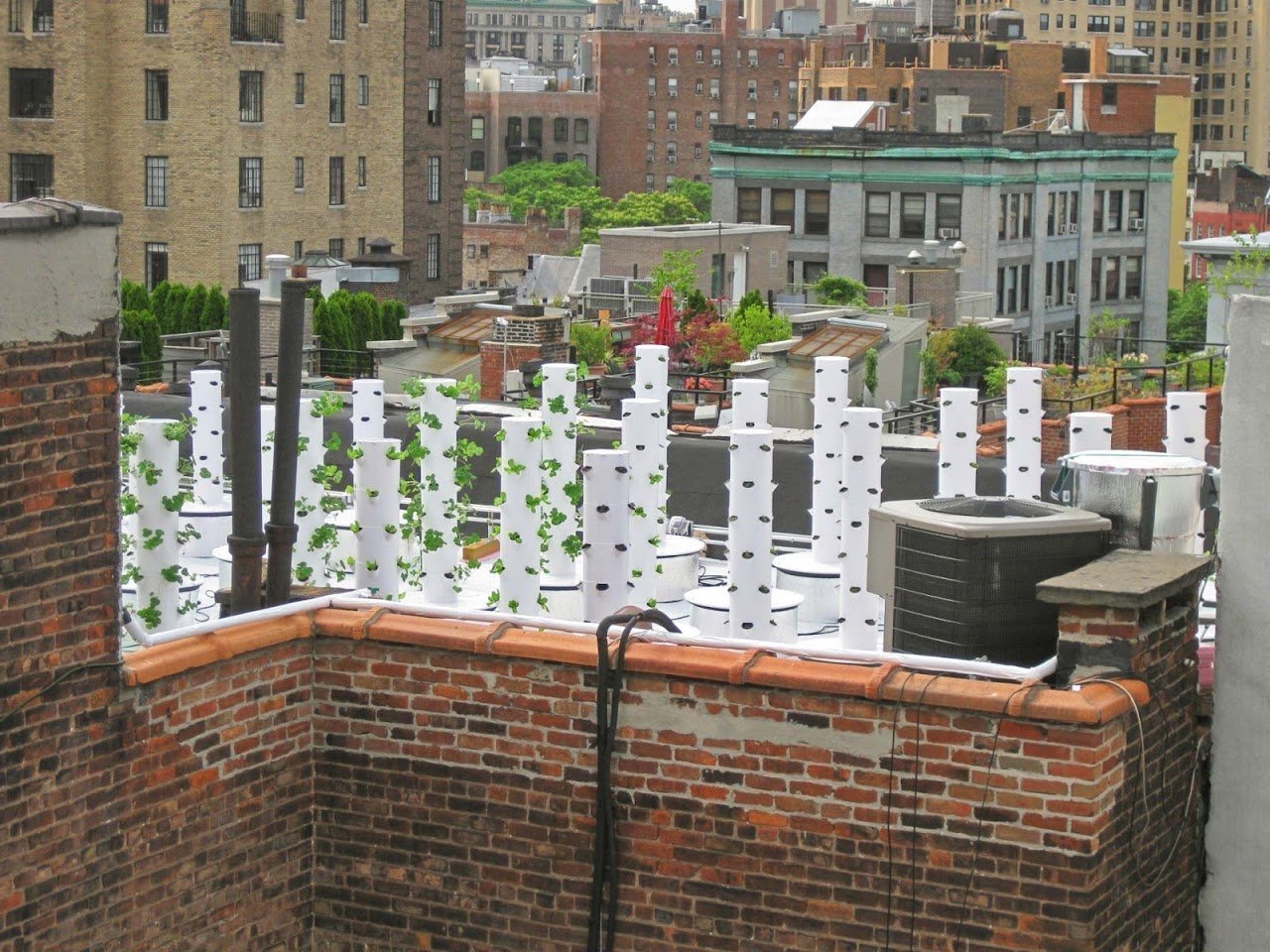 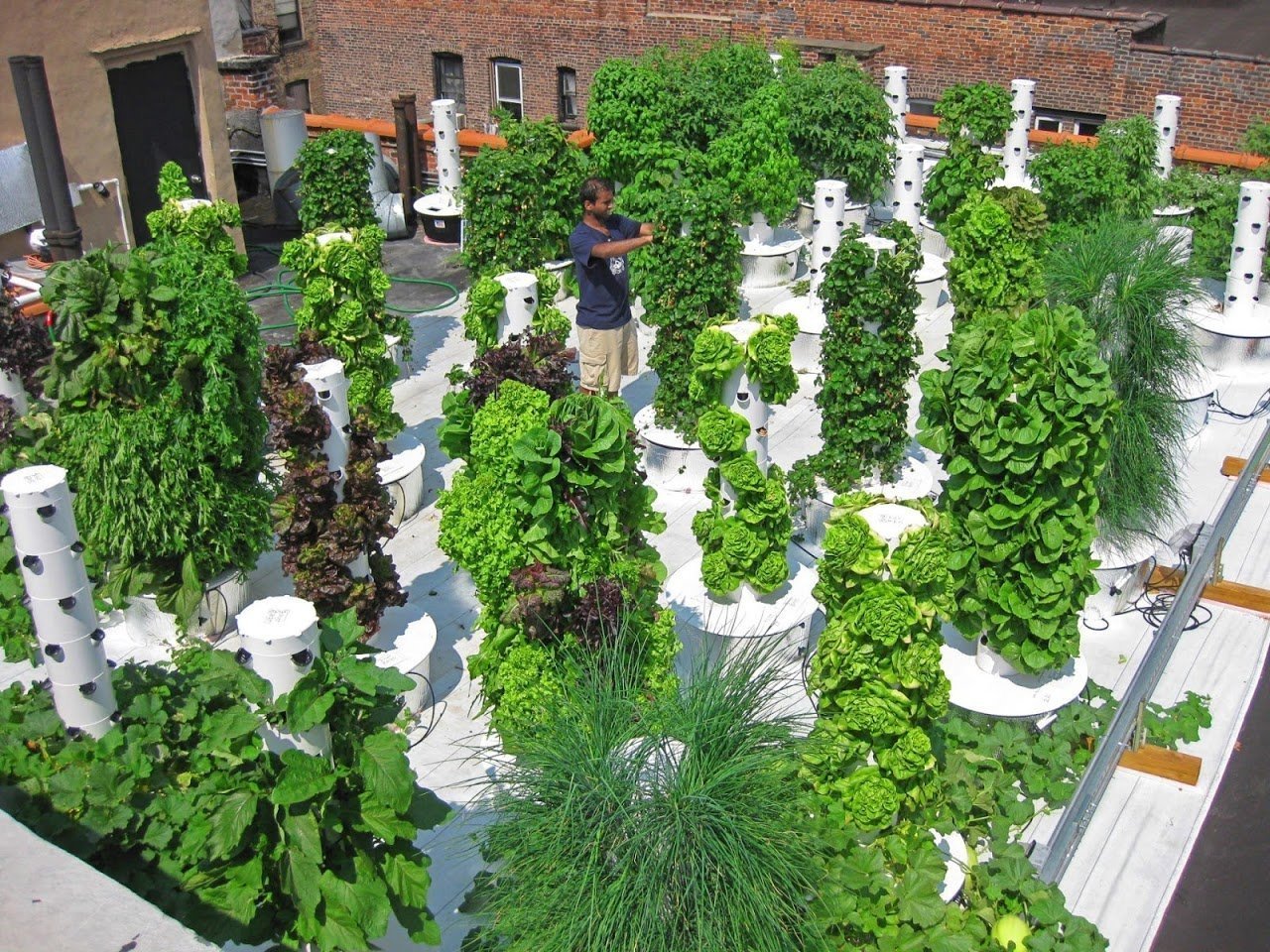 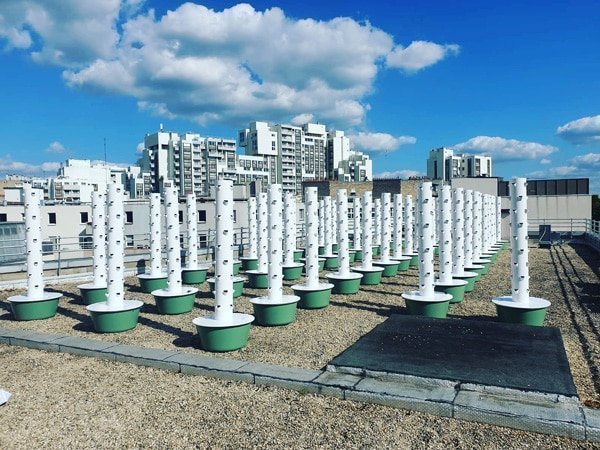 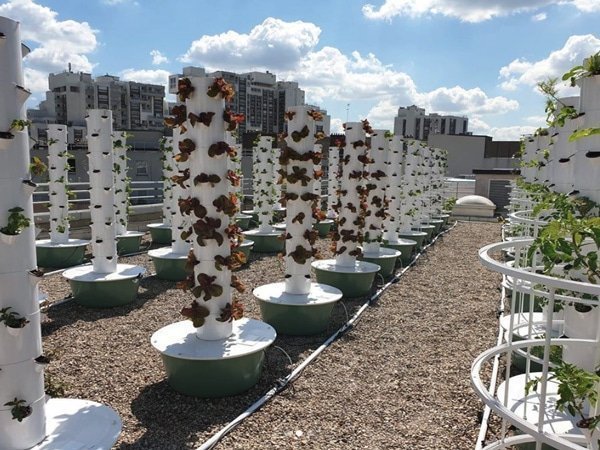 Some other Tower Farms also operate outside from spring to fall using towers featuring 44 growing ports outdoors, and when the winter comes, towers get shortened (since they are modular in size) to 28 growing ports per tower (1.8 m tall), equipped with adjustable/expendable state-of-the-art LED light kit specifically designed for Tower Garden, and are used indoors during the fall and winter seasons. Regrettably, the Tower Garden’s LED light kit cannot accommodate taller towers than the 28 growing ports model (1.8 m tall). In fact, this LED light kit is designed for 20 growing ports only, but at Agrotonomy Tower Farms, we prefer to use it with the 28 plants configuration and leave the bottom section empty.

Some Tower Farms operate year-round outdoors in Mediterranean-like climates i.e. Spain and California, or in tropical climates like in the Philippines or Jamaica.

When considering setting up a Tower Farm outdoors, it is also crucial that temperatures do not go over 35°C/95°F since it might affect crops significantly.

Also, it is important to outline the fact that the weather has been irrationally capricious worldwide showing unprecedented and unpredictable patterns that seem to get worse each year. When setting up a Tower Farm outdoors, the weather factor is always a big risk hindering a Tower Farm operator to be able to forecast crop yields objectively regularly.

However, when setting up a Tower Farm indoors, we advise building a metal galvanized structure such as the one of King Tower Farm in the Philippines. In the case of King Tower Farm, a micro netting mesh has been strict on the structure against insects. Aside from just preventing unwanted insects and other wild animals from destroying the crops, this structure with the micro-netting allows to release beneficial insects such as ladybugs within the premises and keep them “ prisoners” of the Tower Farm. Ladybugs will eradicate the problems of aphids.

A structure such as the one built by King Tower Farm (which we consider to be the beacon of outdoor Tower Farms), also allows to stretch a shading cloth on top to offset the heat from the burning summer sun.

An outdoor Tower Farm needs to have a planting strategy according to the weather/seasons.

It is definitely least expensive option to get started and although crop yields might be bountiful, they might be affected greatly by unforeseen unusual weather patterns & behaviors.

When farming outdoors on a rooftop, we advise using towers featuring either 28 planting ports (1.8 m) or 36 planting ports (2.1 m) maximum in height. In fact, due to the increased wind factor on rooftops, it limits the height of the towers. 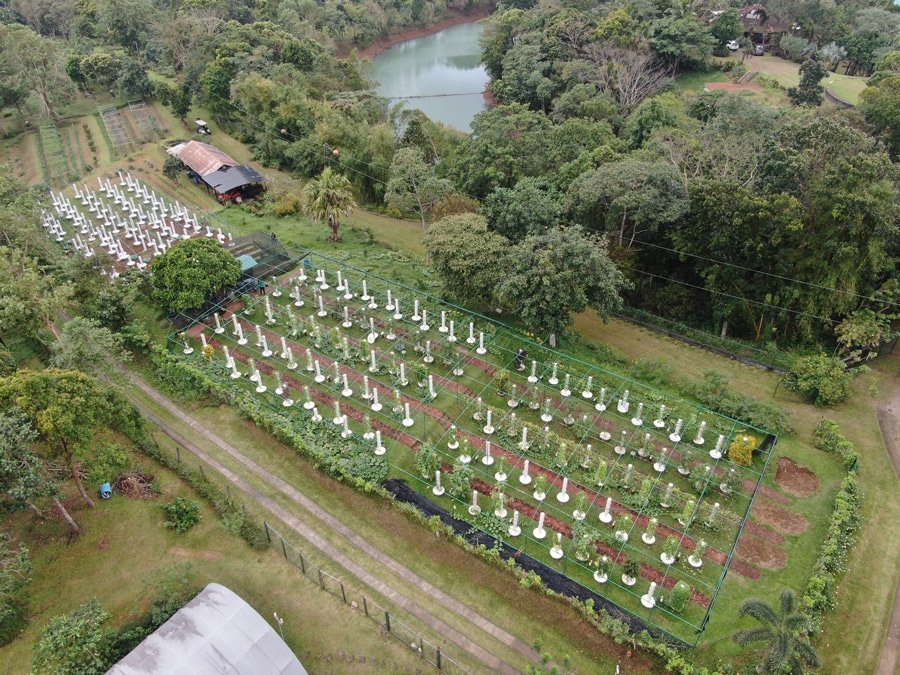 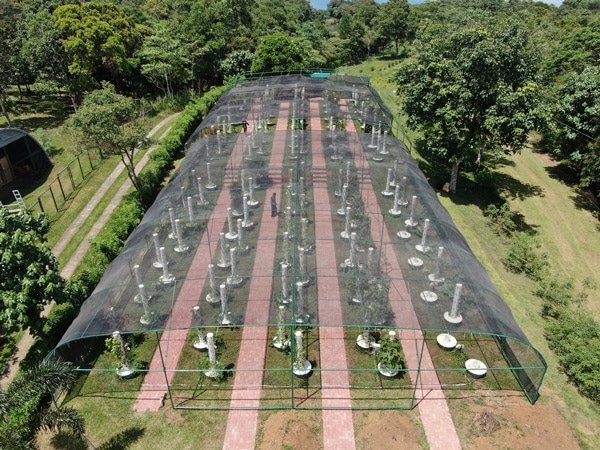 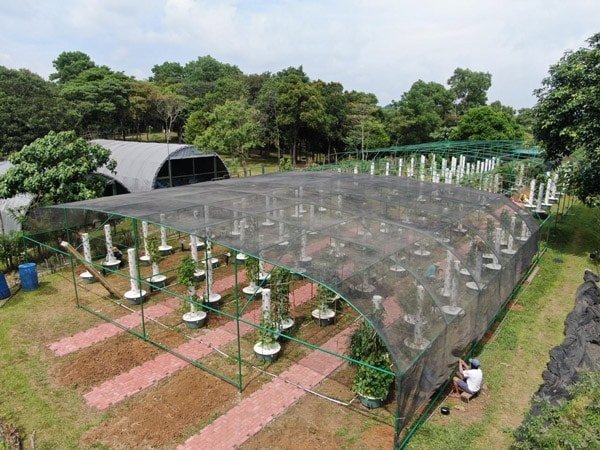 Many new investors considering the food security industry think about converting warehouses into indoor farms operating with artificial light. It is doable but there are many considerations at stake:

1) Warehouses need to be upgraded with suitable insulation and be upgraded/equipped in a way allowing acceptable levels of air exchange. Furthermore, in most cases, a full Control system (i.e. PRIVA) needs to be installed for controlling the humidity, the temperature, the CO2 levels, etc.

Furthermore, there is a substantial investment in the artificial light system. Tower Farms featured in airports, convention centers, or any other area without natural light are using artificial lights as follows: 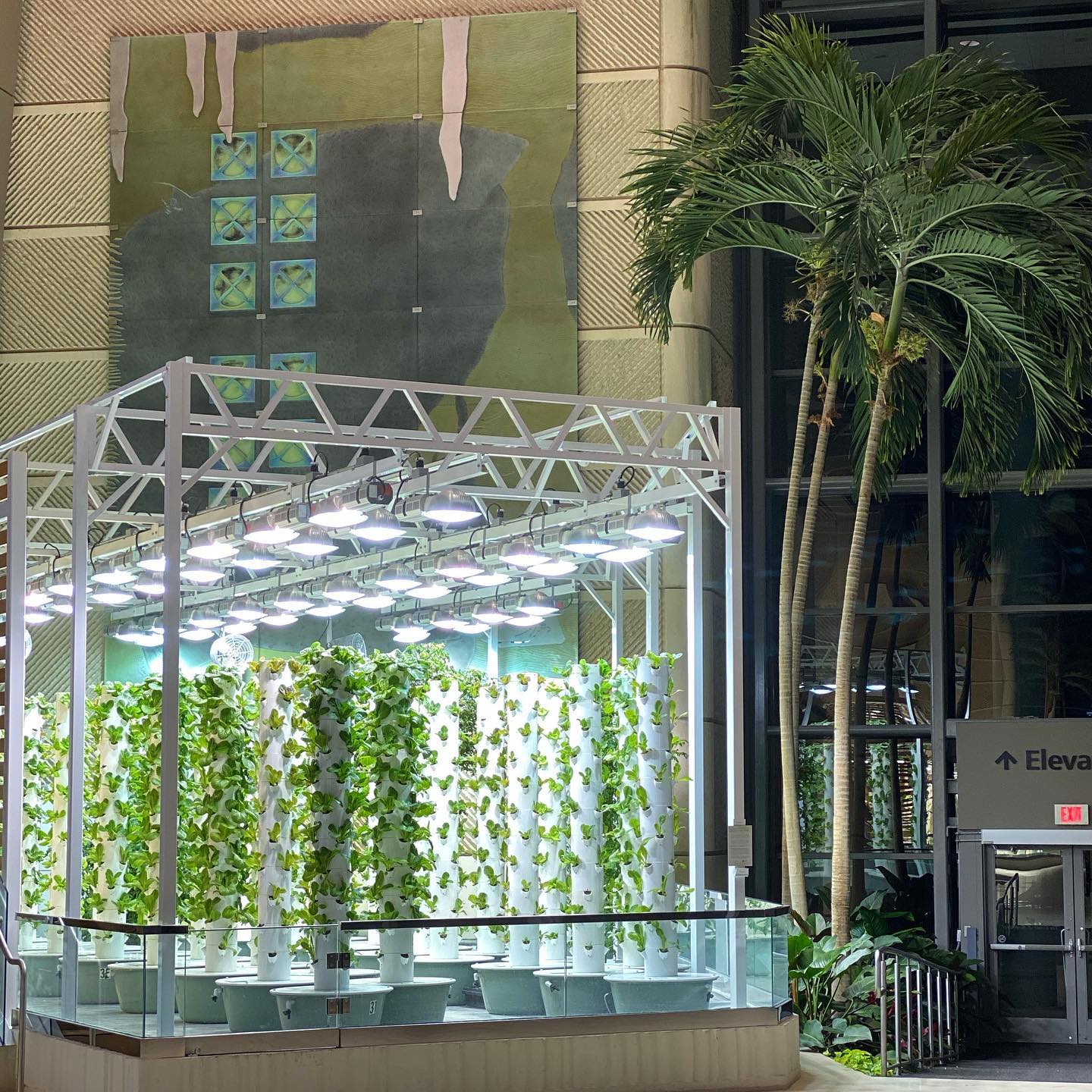 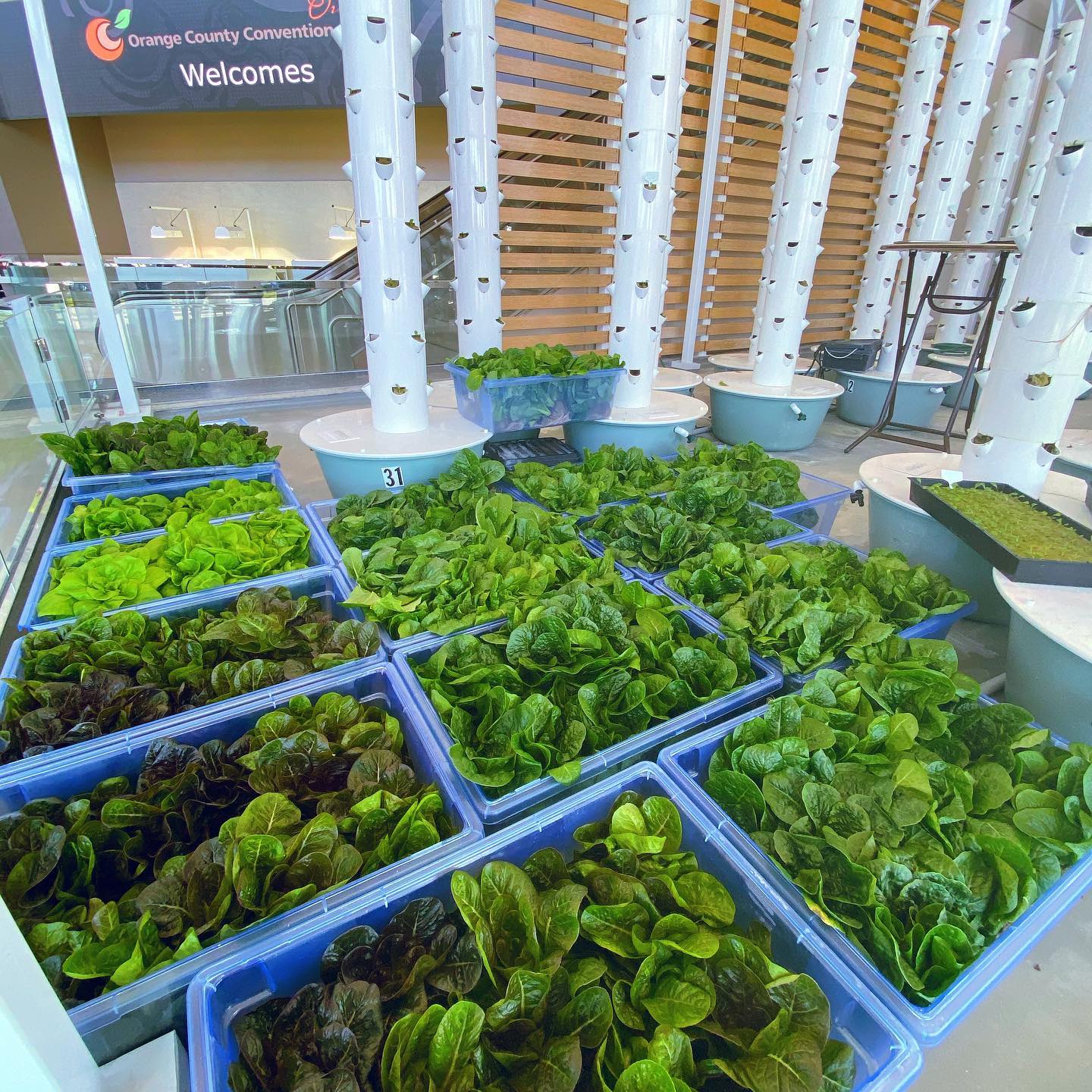 A climate-controlled greenhouse is the best option to run a Tower Farm successfully 12 months out of the year.

Just as an example, True Garden in Arizona, our partner Tower Farm, keeps its greenhouse 24/7 running between 21°C and 24°C regardless of summer temperatures which can reach up to 50°C/120F. Despite such extreme weather, True Garden grows vibrant greens 12 months out of the year regardless of seasons.

Greenhouse technical specifications for Tower Farm should be as follows: 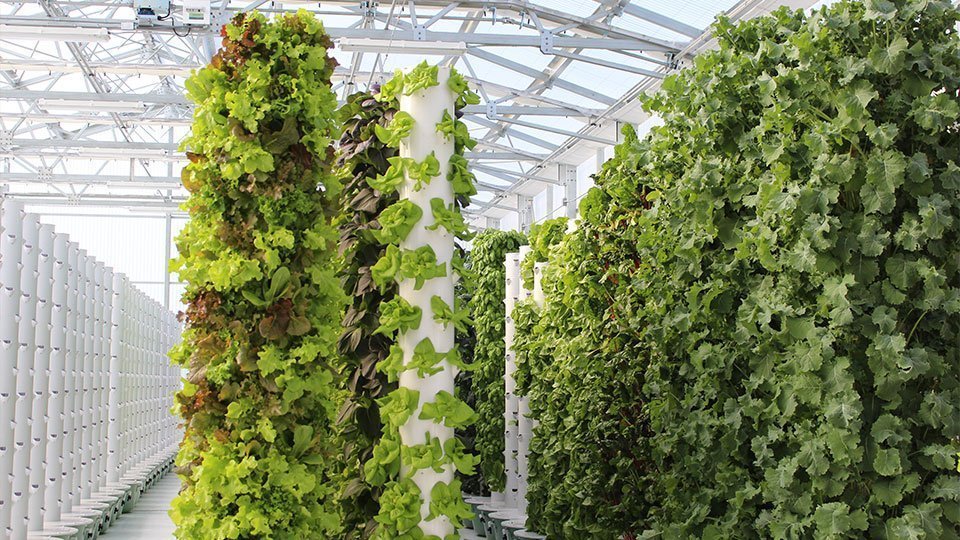 The ideal temperature inside a greenhouse is 72°F to 77°F (22°C to 25°C). However, this is just an “ideal guideline”. Crops such as hot peppers, okra, cannabis, etc. can sustain a much higher ambient temperature then crops such as spinach, lettuce…
It is recommended to have a differential temperature with cooler temperatures at night than the daytime.

In Arizona, at our greenhouse (True Garden), despite the Sonoran desert heat which can go up to 50°C in the summer with up to 90% humidity in the air ( in August during the monsoon season), our state-of-the-art greenhouse runs without air conditioning at an average of 72°F (22°C) during the day.

Ideal light is natural sunlight, a minimum of 12-14 hours per day. The Daily Light Integral required for most food crops for ideal growth is 12-16 moles per square meter per day.

When speaking about the cost per square meter for a climate-controlled greenhouse, it is for the greenhouse and the whole climate control system (fans, atomizers, wet walls, central computer system). Such a rate does not include building costs nor the foundation nor shipping. Rates quoted are usually FOB. 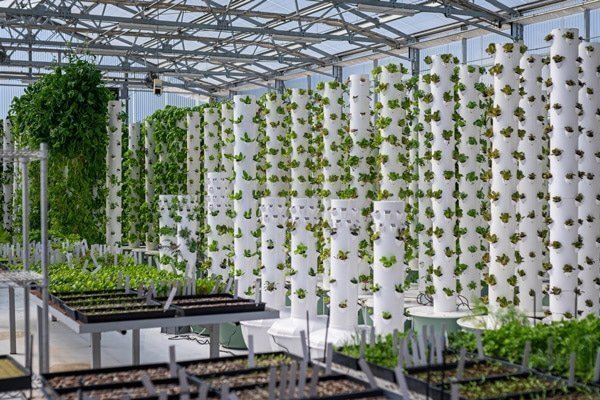 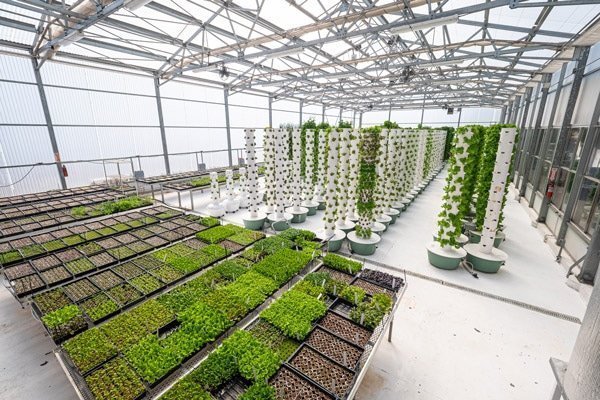 It takes approximately a crew of 10 workers to build, assemble, and configure a 1000 m² climate-controlled greenhouse fully ready to operate. Such a greenhouse system fits in 2 ×40 foot containers.

In general, after the order has been placed, it takes greenhouse manufacturers 6 to 9 weeks on average to be ready to ship the greenhouse. Payment terms are generally 50% upon placing the order and the remaining 50% upon shipping the merchandise.

When the deposit has been issued, generally, the manufacturer will send a blueprint for the foundation as well as the anchors for the structure.

A fully climate-controlled A-frame only carbonate greenhouse (similar to True Garden) will cost an average US$250 when contracting a reputable reasonably priced greenhouse manufacturer. Such costs might be slashed in half when working with China.

China might be known to manufacture low-quality greenhouses, but China manufactures the best quality as well. However, we advise you not to make the mistake to work with a Chinese company unless you purchase your greenhouse through an agronomy consultancy firm or a farming entity that has already established a working relationship with such a Chinese company. We do not recommend first-time greenhouse buyers to shop on Alibaba for example.

When shopping for a greenhouse, we advise you to hire an agronomy consultancy firm that has experience in greenhouse purchasing greenhouses. Alternatively, if you know someone actively involved in greenhouse farming, hire that person but hire someone qualified. 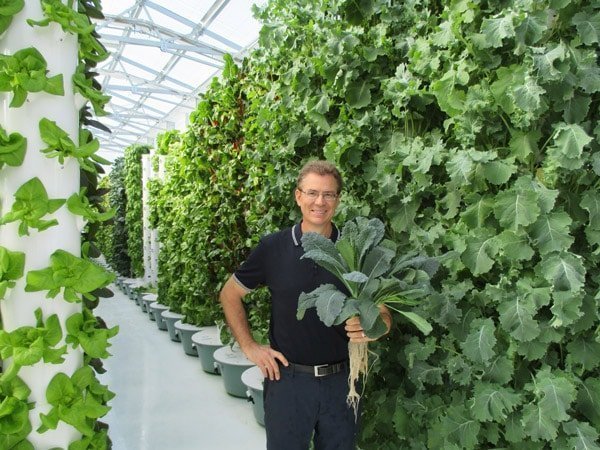 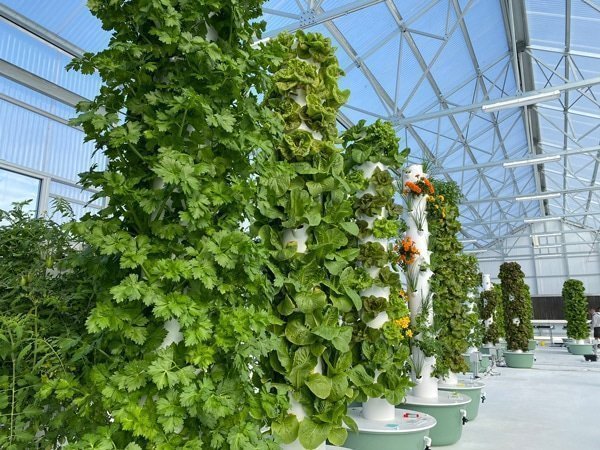 You do not have to be an expert to run a greenhouse. Greenhouses are fully automated systems that just require to follow instructions. However, you do need a greenhouse expert’s assistance to buy your greenhouse. Aside from guaranteed savings, you will be buying what you really need. It is not just a matter of saving money, but spending your budget on the appropriate greenhouse system right from the start.

A qualified expert always saves money for his client when purchasing a greenhouse. When someone is actively involved in greenhouse farming, greenhouse manufacturers do not try to sell unnecessary equipment to such individual. Once again, there are many components to a greenhouse and a greenhouse quotation can be a 10 page+ document listing is ‘zillion’ technical components!

When contacting greenhouse manufacturers, you will only be speaking to salespeople. They all have a different level of commissions depending on the type of systems and components they sell. You will not be speaking to a farmer obviously… Although you might be able to work with a veteran salesman, chances are that such a person is not qualified for vertical aeroponics. Do not listen to the advice of a greenhouse salesman stuck into conventional hydroponic farming or soil farming.

This is why Agrotonomy Tower Farms in partnership with True Garden offers a full turnkey greenhouse purchasing service.

Although we offer greenhouse development full turnkey solutions, we only get involved as consultants for greenhouse projects featuring 400 m² minimum and a fully automated Tower Farm with a minimum of 200 towers.

For greenhouse projects smaller than 400 m² or involving less than 200 towers, we publish the recommended greenhouse specifications for a Tower Farm in our FAQ #24.

We charge a standard fee of $15,000 to get involved as consultants. Such fee guarantees to the client that we oversee the entire customization order of the greenhouse. We provide our customers with various quotes from different reliable greenhouse manufacturers from Europe to the US, and we offer different solutions outlining the pros and cons of each option.

We assist our customers with the full acquisition process of the greenhouse. The savings involved when hiring our services always outweigh our consultation fee (above all if the customer does not have previous experience in greenhouse development and/or vertical farming).

In our case, we have years of experience running a Tower Farm successfully in a greenhouse. We are not salespeople: we are farmers!

Whether someone decides to hire us to purchase a greenhouse or whether such a person prefers to work with another entity, we strongly advise in all cases to get Trustworthy professional help when buying a greenhouse. Once again, when working with professionals who have their client’s best interest at heart, the savings involved when purchasing a greenhouse always offset the consultancy fee.